The ULTIMATEGUIDE to Winning Government Contracts

The public sector is vast, and the range of goods, works and services required to keep it moving is massive.

Everything the public sector needs, from pencils to buildings, has to be purchased via the public procurement process, so there’s a good chance your business can enter this market.

Taken together, the public sector is UK industry’s most valuable customer, spending around £242bn[1] each year. That’s why it’s important for you to understand public procurement.

But we’re not suggesting you jump in feet first. There’s a lot to consider, and you need to understand the costs to your business before you can reap the rewards.

What are the potential costs to my business?

Over the course of this Guide we’ll give you the skills to remove each of these potential business costs, allowing you to focus on the benefits of the market in front of you.

So what are the benefits?

The money we all pay in taxes is used to fund our public services, including the procurement process for purchasing new goods, works and services.

Because this expenditure comes from the taxpayer, government has a duty to guarantee that the money it spends is spent well.

And beyond all of this, the main benefit of working with the public sector is the sheer size of the opportunity…

The opportunity on offer

Total government spending in 2016-17 was £796bn, accounting for all central and local government expenditure, salaries, pensions, expenses and so on.

Of this massive spend, £242bn was attributed directly to procurement: the purchasing of goods, works and services via competition.

Click on the image below to see how this government procurement spend is split: 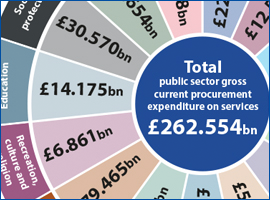 This is your market opportunity. And it’s open to businesses of all sizes.

When the Liberal Democrat/Conservative Coalition Government came to power in 2010 they put businesses at the heart of their plans to grow the economy out of recession.

They set an ambitious target of 25% of all central government procurement spend to be awarded to small businesses in the wider public sector supply chain, and in early 2015 they announced that they had hit that target.

Figures released by the Cabinet Office showed that in 2013-14, 26.1% of central government spending – representing £11.4bn in value – went to SMEs.

However, the public sector is now looking to go even further, with the new Conservative Government announcing plans for a third of all central government spending to go to small firms across the UK by 2020[2] in what could be the biggest SME spending drive the country has ever seen.

With more opportunities on offer than ever before, this is the perfect time to start working with the public sector. 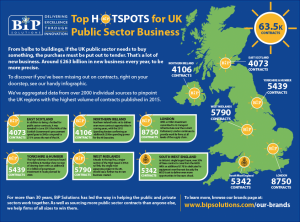 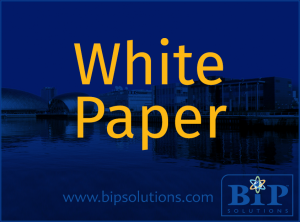 NEW: Read our Business Analysis on the potential impact of Brexit